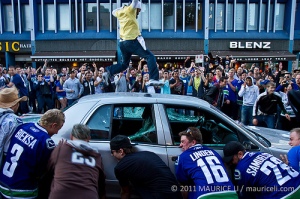 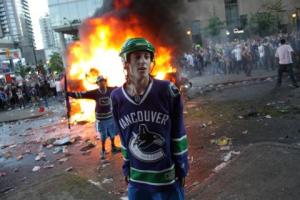 Young Canadians are streaming into the USA to escape hockey-inspired violence and so-called “sports gangs” rampaging through their home country. President Obama, facing a similar crisis on the US southern border, has called the onslaught of illegal Canadian immigrants a far greater threat to national security than the problems in Texas and other southwestern border states: “These (Canadian) kids are well fed and don’t have as far to go as the kids from Central America who are really tired by the time they get here. Plus the Canucks all carry frickin’ hockey sticks. That’s a huge danger for the rest of us.” (Photos by Rueters)

Sunday, July 27, 2014
By Andrew Squibley
WASHINGTON (Rueters) – Tens of thousands of children unaccompanied by parents or relatives are flooding across the northern U.S. border illegally, forcing the Obama administration and Congress to grapple with yet another unexpected humanitarian crisis and budget dilemma.
An estimated 60,000 such children will pour into the United States this year primarily from Canada’s western provinces, including British Columbia, Alberta, Manitoba and the Northwest Territories, according to the administration, up from about 6,000 in 2011.
Now, Washington is trying to figure out how to pay for their food, housing and transportation once they are taken into custody. “Not only that, but separating them from their dangerous hockey sticks is no easy task, either,” said one official familiar with the Canadian problem.
The flow is expected to grow. The number of unaccompanied, undocumented immigrants who are under 18 will likely double in 2015 to nearly 130,000 and cost U.S. taxpayers $2 billion, up from $868 million this year, according to administration estimates.
“We’re lucky it’s only the western provinces (of Canada) that’s sending their kids to the US. The kids in the eastern provinces aren’t all that bright and haven’t figured out how to get past Lake Ontario, the Niagara River and the St Lawrence River,” the official said. “Once they see what bridges and boats are for, then this immigration problem will only get worse.”
The shortage of housing for these children, some as young as six months, has already become so acute that an emergency shelter at McChord Air Force Base near Tacoma, Washington, has been opened and can accommodate 1,000 of them, Homeland Security Secretary Jeh Johnson said in an interview with Rueters. 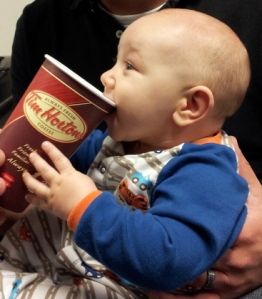 The issue is an added source of tension between Democrats and Republicans, who disagree on how to rewrite immigration laws. With comprehensive legislation stalled, President Barack Obama is looking at small, administrative steps he could take. No details have been outlined but immigration groups are pressing him to take steps to keep families with children together.
The Canadian minors flooding over the border are often teenagers leaving behind crime and chaos in communities as diverse at Calgary and Yellow Knife. A culture of violence, many believe to be inspired by introducing hockey to children as young as 2, has infected towns across Canada’s western plains, according to experts in Canadian sociology, a heretofore unknown academic discipline.
Young illegal Canadians are sometimes seeking to reunite with a parent who is already in the United States, also without documentation, according to US Customs officials.
Canadian adults, leaving their families behind, have been attracted to low-paying jobs in the booming US micro-brewery industry. “You don’t have to scratch the surface very deep at any one of these small breweries before you’ll find an illegal Canuck,” one plant manager in Fredericksburg, Virginia, told Rueters. “Most often you’ll find them passed out behind the fermentation tanks. They like the smell.”
“This is a humanitarian crisis and it requires a humanitarian response, even for our neighbors to the north — which is where we want them stay,” Senate Appropriations Committee Chairwoman Barbara Mikulski said in an interview.
The Maryland Democrat, a former social worker, has likened the flood of unaccompanied children to the “boat people” of past exodus movements. “Except we know a lot of Canadian young people haven’t the slightest idea of how to use a boat.”
Immigration groups lobbying for comprehensive reform of Canadian immigration policies argue that children are being hit hardest by the political deadlock. “It’s always the kids who suffer first and worst,” Mikulski said. “And can we blame them for wanting to get as far away from Canada as possible? Look at Justin Bieber, Alex Trebek, Shania Twain, William Shatner and most of the ‘Saturday Night Live’ cast. They couldn’t wait to get out of that hell-hole either.”
-30-