From college entrance exams to universities, Donald Trump’s academic achievement was just what we thought: Good. Yeah, like “last-in-his-class” good.

WASHINGTON, DC (RUETERS) — Contrary to claims by Donald Trump that he’s a “stable genius,” SAT results and university grades for the 45th president disclosed this week show him to be on an intellectual par with your run-of-the-mill gerbil.   (And maybe we give the edge to the proud member of the Gerbillinae family.)

Americans who took time to watch the public testimony of Michael Cohen last month before the US House Oversight Committee will remember the former Trump personal attorney and so-called “fixer” testifying that he, at Trump’s insistence, threatened the president’s various schools, and even the College Board, if his grades or test results ever became public.  Each school — from elementary up to the Wharton School at Penn — plus the standardized-test administrators were ordered to “bury” any details related to the president, Cohen testified.

But “facts are stubborn things,” Founding Father John Adams famously said.  They have a way of surfacing despite attempts to hide them.  And this week that’s exactly what happened, thanks to sources at the College Board and Fordham University in the Bronx where Trump spent two years wallowing in the shallow end of the academic pool.

When the committee heard Cohen testify about his efforts to hide Trump’s school and test results, Democrats collectively let out an audible sigh.  “We knew we would see them eventually,” one Democrat member of the panel said at the time.  Trump “says, repeatedly, he’s a ‘stable genius,’ so let’s see how true that is.  Russia, if you’re listening, please release our president’s SAT scores and report cards.”

But Russia wasn’t needed – this time.  Sources were only too happy to provide evidence of Trump’s lightweight mental status.

A former College Board executive told Rueters, “The guy managed a 123 — combined!  123!  And we used to give 100 points back in the day for just getting your fucking name right.”

According to sources close to Cohen, Trump’s lifelong ineptitude in academics — as well as all his businesses — was shielded from ugly consequences by his father, Fred, one of New York’s wealthiest and most successful real estate developers of the 20th Century.

Fred Trump died in 1999, age 93, in true Trump family form after evading hundreds of millions in real estate and inheritance taxes through illegal schemes in which his children were active participants, according to an expose by The New York Times.

“The more Donald tried to succeed on his own,” said a friend of his second wife, Marla Maples, “the more he would fuck things up.  I mean, who goes broke with a casino in Atlantic City?  No one, except Donald.  And he did it three times!  You know the old joke:  If you’re Donald Trump, how do you make a billion dollars?  Start with two billion.”

It shouldn’t have surprised his father, though, this friend continued.  “He kept hoping numb-nuts could turn things around.”  But it was not to be.

Dating back to the 1950s, when the future reality-TV star and president first entered the “Montessori School for Total Losers” in Queens, he usually finished the year dead last or nearly so.  Said a classmate from the ’50s, “The only thing he proved consistently good at was groping the girls and making those stupid hand gestures when he spoke.  You know, when he puts his thumbs and fingers together.  Like he wants to sound important.” 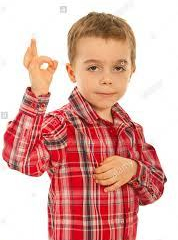 Trump’s favorite hand gesture. He likes to use it when he thinks he’s making sense. (Photo by Rueters.)

About the time Donald was ready (as ready as he would ever be) for college, Fred Trump found himself in a conundrum, former members of the Trump Organization told Rueters.  “No way he could pass off Donny as an athlete or bribe some coach to put him on a tennis or rowing team, like they do now.  You know, the bone spurs.”  Fred Trump got his boy into college the old-fashioned way:  He donated a building to Fordham.  “It wasn’t the prettiest or newest or largest university building. In fact, I don’t think it even had toilets,” said an ex-Trump worker.

But it was enough for young Trump.  It got him into the nationally known university.

Trump’s Fordham experience doesn’t look like it went particularly well, however, based on his first semester grades freshman year.

A GPA of 1.28, or D average, normally would be enough for academic probation, but once again Father Fred saved his son’s ass with another large donation of real estate to Fordham:  this time, the Queens neighborhood of Jamaica.

Still, after Trump’s two years at Fordham, the university had had enough with this train wreck of a student and told him to hit the road.  Also, university officials didn’t think owning Jamaica was such a bargain after all.

In 1966, young Trump decided he liked Philadelphia and for his final two years in college wanted to attend the Wharton business school at U Penn.  Fred Trump knew the nitwit couldn’t get into such a prestigious school on his own.  Falling back on the tried and true, he started looking around for something to donate to assure Donald’s acceptance:

The rest is history.